Argonne’s collaborations in Arkansas and across the United States have led to groundbreaking discoveries and development of new technologies that help meet the nation’s needs for sustainable energy, economic prosperity, and security. 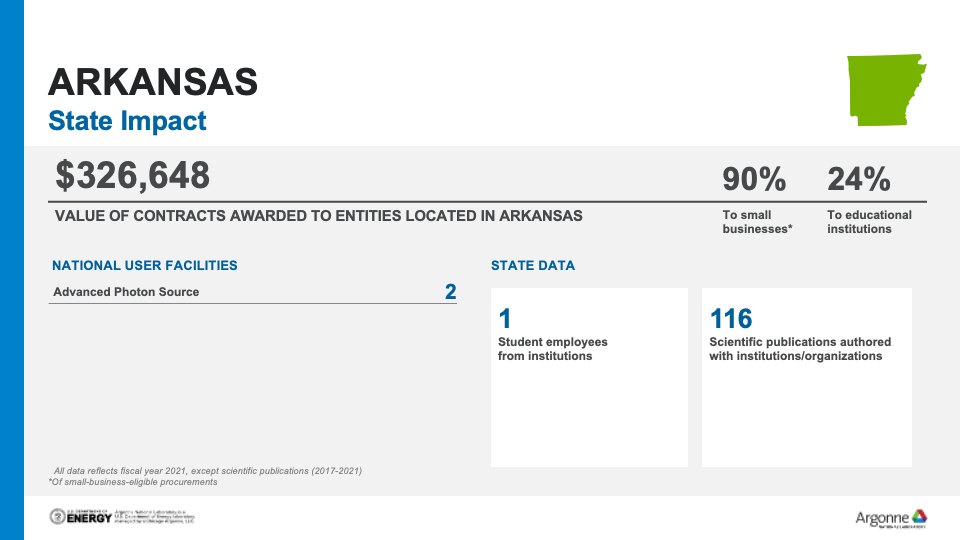 Researchers at the University of Arkansas, Fayetteville, partnering with a team of scientists at the U.S. Department of Energy’s (DOE) Argonne National Laboratory, have found that nanoparticles composed of nickel and iron are more efficient and cost-effective than other, more costly metals when used as catalysts in producing hydrogen fuel.

Led by U of A physical chemist Jingyi Chen and chemical engineer Lauren Greenlee, the team designed nanoparticles that act as catalysts during water electrolysis, breaking water molecules apart by passing an electric current over them and making the process more efficient. Composed of an iron and nickel shell around a nickel core, the nanoparticles interact with the hydrogen and oxygen atoms, weakening their bond and increasing the efficiency of the reaction. Nickel and iron are also less costly than other catalysts, which are made from scarce materials.

The DOE’s Brookhaven National Laboratory also participated in the study.

Scientists from the University of Arkansas have been chosen to lead a multi-institutional team that includes Argonne, universities, laboratories and other entities in an effort to design systems that will protect solar technologies from cyberattack. The DOE’s Solar Energy Technologies Office awarded the university a $3.6 million grant to implement the initiative.

The list of potential mechanisms that underlie an unusual metal-insulator transition has been narrowed by a team of scientists using a combination of X-ray techniques.
August 12, 2015 | Arkansas, California, Illinois