Argonne’s collaborations in Florida and across the United States have led to groundbreaking discoveries and development of new technologies that help meet the nation’s needs for sustainable energy, economic prosperity, and security. 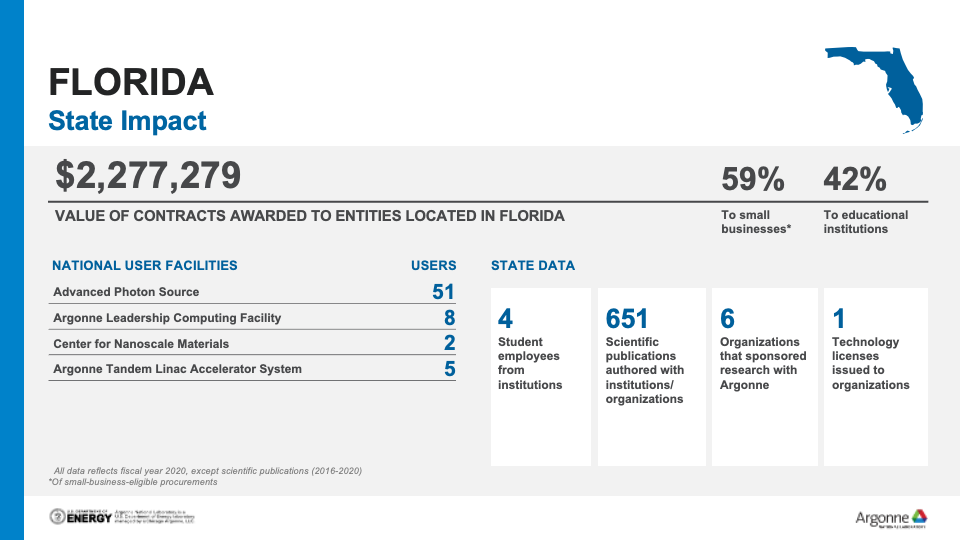 As widespread electrification drives demand for lithium-based batteries, the battery supply chain in the United States must expand. To achieve this goal, battery manufacturers must expand their output by 20 to 30 times and establish a secure and sustainable supply chain. The U.S. Department of Energy’s (DOE) Argonne National Laboratory announced the creation of Li-Bridge, a public-private alliance committed to building this supply chain.

The first collaboration of its kind in the U.S. battery industry, Li-Bridge brings stakeholders together to improve the supply chain. Florida-based NAATBatt International joined with two other trade associations ― New Energy Nexus in Oakland California and New York Battery and Energy Storage Technology Consortium in Albany ― to represent more than 600 industry stakeholders. Argonne serves as the facilitator between private industry and the Federal Consortium for Advanced Batteries, which recently released a ​“national blueprint” for lithium batteries to the year 2030. The plan puts the United States on a path to long-term competitiveness in the global battery value chain, outlining five critical goals for generating equitable, clean-energy jobs while mitigating climate change.

Beneath the state of Florida lies the sprawling Floridan Aquifer, the nation’s largest freshwater aquifer. Producing 1.2 trillion gallons of water annually, it provides drinking water for 10 million people, irrigates more than 2 million acres and supports lakes, springs and wetlands and the environments they nurture. But rising sea levels from global warming threaten the aquifer with the intrusion of saltwater, potentially polluting the aquifer.

In a study led by the University of Chicago, scientists at Argonne applied a relatively new technique called radiokrypton dating, which uses a radioactive version of the element krypton to study the origin and flow of freshwater and saltwater in the aquifer. The team used Argonne’s TRACER Center to perform the technique.

Radiokrypton dating has incredible potential to drive discovery in physics, geology and beyond. It also complements carbon dating when performed on the same samples. Scientists can use results from radiokrypton dating to calibrate carbon dating analysis. Once corrected, the carbon data can provide additional insights. The research was supported by the Ben Gurion University–Argonne–University of Chicago Collaborative Water Research Initiative and DOE’s Office of Nuclear Physics.

Data scientists at Argonne worked with AT&T, a global leader in telecommunications, media and entertainment, and technology, to build the company’s Climate Change Analysis Tool (CCAT). Using physics-based regional climate models — modeling that dramatically improves the ability to project changing risks to infrastructure from severe events — Argonne developed a unique dataset that lets users project such risks to local communities. The datasets enabled AT&T to build CCAT, helping it anticipate how climate change will affect its infrastructure and operations 30 years into the future. AT&T also made the data public so that communities could benefit from it.

AT&T subsequently funded research at two Florida universities to use the climate datasets to aid decision making at the community level. Scientists at the University of Miami developed a citywide climate risk assessment of individual lots, blocks and neighborhoods, enabling decision makers to assess vulnerability and risk on many dimensions — such as economic, health, food, water, housing and environmental — and explore options for climate adaptation and policy change. Meanwhile, a team at the University of South Florida in St. Petersburg, built a crowdsourced community resiliency information system for St. Petersburg. Identifying neighborhood-level socioeconomic and biophysical vulnerabilities, it will ensure the participation of diverse communities in decision making around preparedness, resilience and adaptation.

Over a petabyte of data exists in Argonne’s modeling system — the equivalent of hundreds of millions of photographs — making it one of North America’s largest repositories of  high-resolution climate modeling data.

Working with Northwestern University in Evanston, Illinois, and the University of Florida, Gainesville, Argonne scientists reported a two-dimensional material called borophane, made of boron and hydrogen and only two atoms thick.

Borophane traces its origins to borophene, a sheet of boron atoms synthesized in 2015 by a team that included researchers at Argonne’s Center for Nanoscale Materials, a DOE Office of Science User Facility. Borophene is unstable, but when hydrogen atoms are added, it becomes borophane, its more stable ​“cousin.”

Even though a borophane sheet is thin, its structure is complex because of the many ways the boron and hydrogen atoms can arrange themselves. Scientists say borophane has the potential to boost the performance of electronic and telecommunication devices. And because borophane is stable, scientists predict it will play a role in other applications, such as high-speed communication systems, medical equipment, solar cells and more.