Argonne’s collaborations in Kentucky and across the United States have led to groundbreaking discoveries and development of new technologies that help meet the nation’s needs for sustainable energy, economic prosperity, and security. 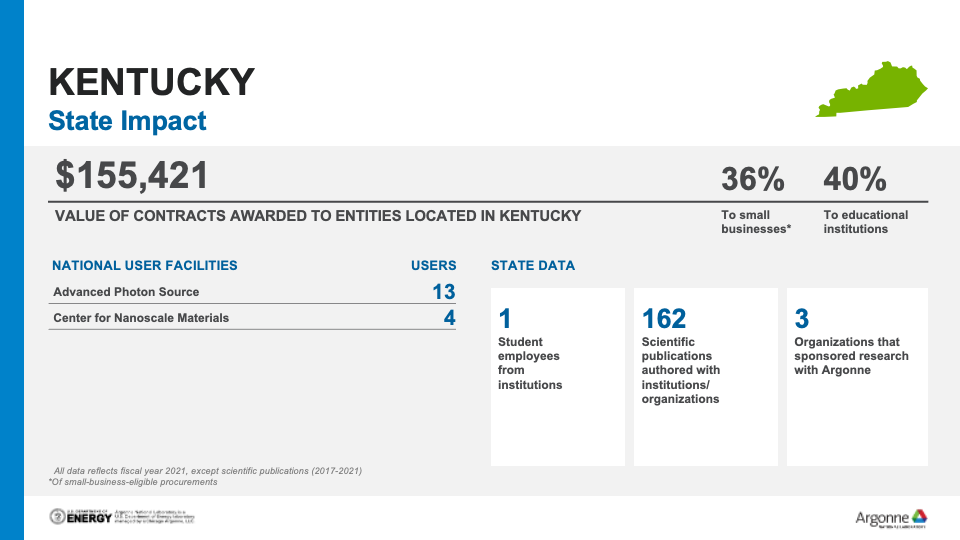 The University of Kentucky (Lexington) has been named a partner of the Joint Center for Energy Storage Research (JCESR), the U.S. Department of Energy’s (DOE) Innovation Hub led by Argonne National Laboratory. Now in its second five-year term, JCESR’s research focuses on transformative science and technology for next-generation batteries.

Led by associate professor of chemistry Susan Odom, the team collaborates with JCESR partners to study organic molecules for redox flow batteries. These large-scale energy storage systems are designed to inexpensively store electricity generated by wind and solar as part of the future electricity grid. Odom credits a strong history of collaboration with JCESR partners in its first five years as a reason for being selected as a participant in its $120 million second-term research grant.

Bacteria discovered after a fire in a coal mine may have opened the door to new and improved antibiotics.

To create better antibiotics, scientists often tinker with natural molecules by creating synthetic chemical reactions, but sometimes it is easier to find an enzyme to catalyze the process. This search led the team to observe that a strain of bacteria from the fire produced an enzyme that allowed the rapid synthesis of analogs of daptomycin, an antibiotic used in fighting blood and skin infections. Using the beamline, the team solved the structure of the enzyme as a potential blueprint for engineering more effective products and treatments.