Argonne’s collaborations in North Dakota and across the United States have led to groundbreaking discoveries and development of new technologies that help meet the nation’s needs for sustainable energy, economic prosperity, and security. 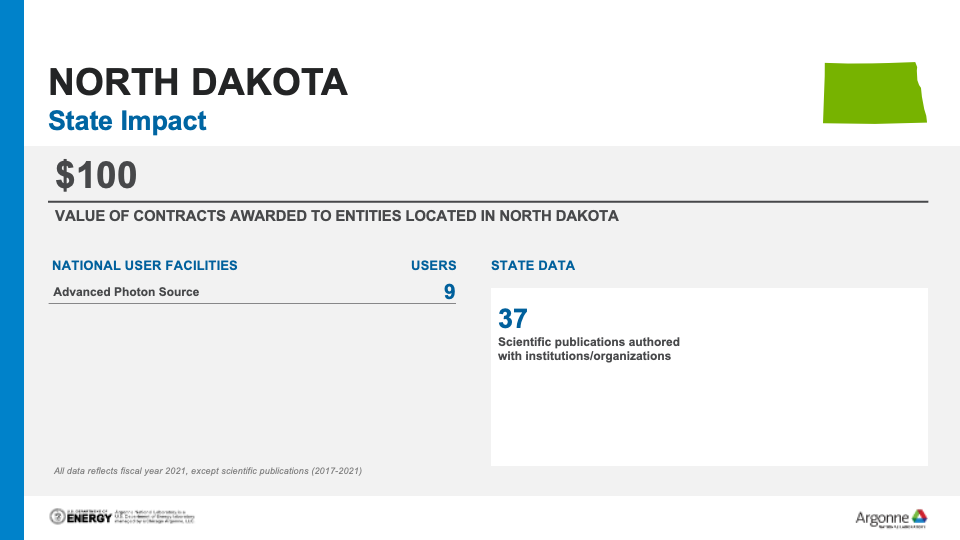 Researchers from North Dakota State University (Fargo), working with scientists from the U.S. Department of Energy’s (DOE) Argonne National Laboratory and other institutions, have devised a new way of making quantum dots — nano-sized semiconductor particles that emit light when their electrons are exposed to ultraviolet light.

The team focused its study on synthesizing silicon quantum dots. Traditional methods for creating the particles require the use of dangerous materials such as silicon tetrahydride gas or hydrofluoric acid. In its quest for a safer method, the team used a liquid form of silicon to make the nanoparticles at room temperature using relatively benign procedures. Scientists see many potential applications, including in cell biology, medical imaging, quantum computing and solar cells.

The National Science Foundation provided support for this study. Other members of the team include the National Institute of Standards and Technology, Northwestern University and the University of Minnesota.

In some of the waste streams generated by the oil and gas industry in the United States, it’s not uncommon to find Technologically Enhanced Normally Occurring Radioactive Materials (TENORM) at unsafe concentrations. These materials come from naturally occurring elements in the underground rock formations from which oil and gas are extracted. If not properly managed, such waste streams pose potentially serious health risks and threaten public health. To gauge the risk of North Dakota’s TENORM in waste streams, Argonne scientists conducted assessments to evaluate the radiological doses associated with several scenarios of oil and gas operations, including the operations themselves, improperly managed wastes and transportation of waste to and disposal in landfills.

The team has also measured the economic impacts of several TENORM disposal options and developed tools that help organizations like the North Dakota Department of Health make more informed decisions for managing TENORM-containing wastes. Scientists have also conducted radiological risk assessments on a number of management and disposal options, including spreading TENORM over land, placing waste in nonhazardous landfills and managing scrap material contaminated with TENORM.