Argonne’s collaborations in New York and across the United States have led to groundbreaking discoveries and development of new technologies that help meet the nation’s needs for sustainable energy, economic prosperity, and security. 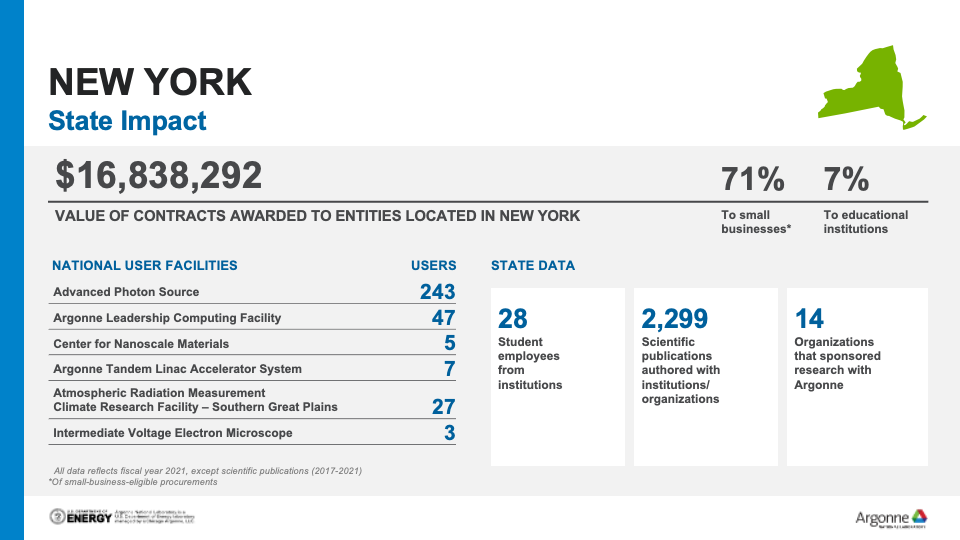 As widespread electrification drives demand for lithium-based batteries, the battery supply chain in the United States must expand. To achieve this goal, battery manufacturers must expand their output by 20 to 30 times and establish a secure and sustainable supply chain. The U.S. Department of Energy’s (DOE) Argonne National Laboratory announced the creation of Li-Bridge, a public-private alliance committed to building this supply chain.

In the first collaboration of its kind in the U.S. battery industry, Albany-based New York Battery and Energy Storage Technology Consortium (NY-BEST) joined two other trade association partners ― Florida-based NAATBatt International and New Energy Nexus in Oakland, California ― to represent more than 600 industry stakeholders to improve the supply chain. Argonne serves as the facilitator between private industry and the Federal Consortium for Advanced Batteries, which recently released a ​“national blueprint” for lithium batteries to the year 2030. The plan puts the United States on a path to long-term competitiveness in the global battery value chain, outlining five critical goals for generating equitable, clean-energy jobs while mitigating climate change.

A group of scientists and engineers at Argonne  is helping the New York Power Authority (NYPA) determine the risks a changing climate poses to its infrastructure and investment strategy. The interdisciplinary Argonne team is using its unique state-of-the-art climate and infrastructure system modeling techniques and a powerful supercomputer to help NYPA better assess how its assets and business may be affected by extreme weather and other hazards.

Argonne creates its climate model simulations and data analyses using Theta, a high-performance supercomputer at the Argonne Leadership Computing Facility (ALCF). This computationally intense calculation — which would take more than 3,000 years to run on a standard laptop — will take just hours on Theta. The ALCF is a DOE Office of Science User Facility.

Argonne and two other institutions are partnering with DOE’s Brookhaven National Laboratory, Upton, New York, to answer compelling questions surrounding a range of materials, including those for quantum and energy applications.

The three-year, DOE-funded project centers around a mega-electron volt ultrafast electron diffraction (MUED) instrument. Inspired by devices like electron microscopes, the MUED instrument at Brookhaven is the first of its kind in the world. Scientists can learn more about materials during phase transitions,  when materials undergo changes in physical properties. However, phase transitions occur quickly and are elusive to capture. Ultrafast instruments like MUED can pause materials in a state of non-equilibrium, permitting scientists to probe the materials and discover more about them.

The team will analyze its gathered data and simulations at the Argonne Leadership Computing Facility (ALCF), a DOE Office of Science user facility, with techniques involving optimization, artificial intelligence and machine learning. Using MUED, researchers will learn how to drive materials into states that exhibit new or previously unimagined properties.

Scientists at the DOE’s Los Alamos National Laboratory in Los Alamos, and The University of New Mexico, Albuquerque are also collaborating on the project.

Armonk (New York)-based IBM’s quantum division, IBM Q Network, is training the quantum computing workforce of tomorrow with the Chicago Quantum Exchange (CQE), of which the Argonne is a founding member. The effort includes a postdoctoral training program that links academia, national laboratories and industry to address the current and future demand for quantum and STEM talent on a national scale.

“As we continue to explore practical applications for quantum computing, it’s critical we partner with businesses and organizations from a variety of industries and disciplines,” Bob Sutor, vice president, IBM Q Strategy and Ecosystem, said in January 2019. ​“These organizations will work directly with IBM scientists, engineers and consultants to explore quantum computing for specific industries. They will have cloud-based access to IBM Q systems, as they work to discover real-world problems that may be solved faster or more efficiently with a quantum computer versus a classical computer.”

New York City’s critical supply chains are better protected from interruptions, and its infrastructure from extreme weather events, after Argonne collaborated with federal and local government agencies to provide the city with solutions. In one project, the U.S. Department of Homeland Security partnered with Argonne’s Decision and Infrastructure Sciences division to assess the city’s high percentage of freight transport that depend on trucking and critical supply chains vulnerable to interruption due to potential points of failure. Argonne’s analysis and report provided recommendations, including a long-term shift of some truck freight to rail and maritime options.

In another project, Argonne contributed to a review of the city’s energy, transportation and communications infrastructure to protect its residents and businesses from extreme weather impacts. Through extensive modeling of projected electric power grid operations stressed by a long-duration heat wave, and a geospatial analysis of critical infrastructure resource flows, the project identified vulnerabilities and failure points. Argonne experts developed methods to understand dependencies and interdependencies among infrastructure systems, evaluated critical supply chains and responded to disasters.

New York’s Cornell University collaborated with Argonne and the University of Chicago to discover an efficient way to grow extremely thin films of organic materials that could improve electronics. The films could be used as electrical capacitors, nanorobots (a fabric that bends or straightens when exposed to water or light), membranes to filter water or boost batteries and sensors to detect toxins. The findings were published in December 2019 in Science.

Through this project, Cornell researchers worked at the forefront of materials science and used one of the most technologically complex machines in the world — the Advanced Photon Source (APS), a DOE Office of Science User Facility at Argonne — which produces ultrabright, high-energy X-ray beams. These X-ray beams allow users to collect data in unprecedented detail and in amazingly short time frames, opening doors to breakthroughs in nearly every scientific discipline.

Cornell University is also a partner in the Argonne-led Joint Center for Energy Storage Research (JCESR), an energy innovation hub sponsored by DOE with a mission to design and build transformative materials that can be mixed and matched to build a diversity of next-generation batteries. The Cornell team investigates the polymerics that go into batteries. 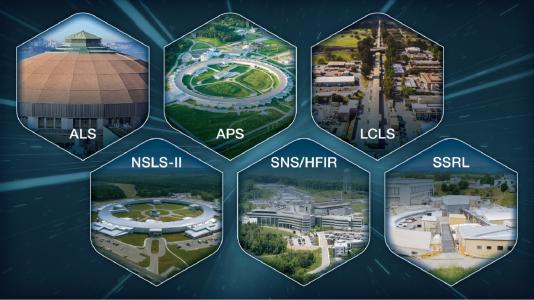 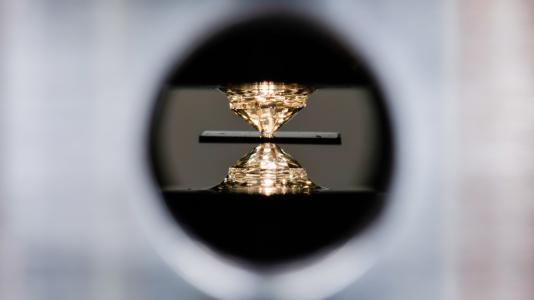