Argonne’s collaborations in Maryland and across the United States have led to groundbreaking discoveries and development of new technologies that help meet the nation’s needs for sustainable energy, economic prosperity, and security. 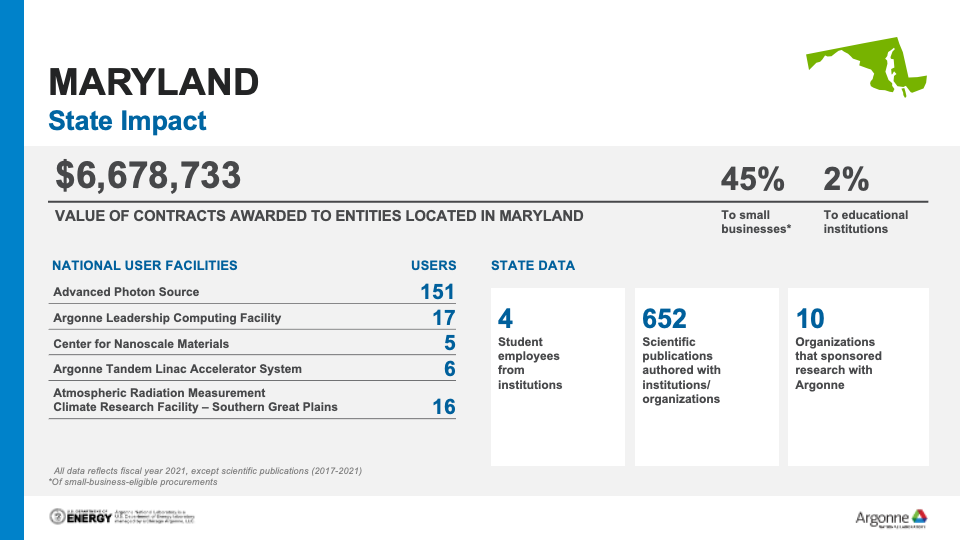 The University of Maryland, College Park (UMD) has joined with the U.S. Department of Energy’s (DOE) Argonne National Laboratory in a $10 million effort funded by the Army Research Laboratory, to develop a more powerful, faster-charging battery that will also be safer and more resilient in extreme temperatures. The university’s involvement springs from the novel ceramic structures it developed for fuel cells in collaboration with Montana State University. Researchers will build a new battery substituting ceramic in place of the plastic membrane and liquid electrolyte currently in use. Because ceramic cannot catch fire, it will be safer and more durable and may afford faster charging time. If successful in military applications, such advances could ultimately benefit many battery-based consumer products, as well.

Participants include Stony Brook University, the University of Texas at Austin, the DOE’s Brookhaven National Laboratory, the National Institute of Standards and Technology and several private companies

Blazing a path to broaden the appeal of electric vehicles (EVs), the  DOE’s Office of Energy Efficiency and Renewable Energy has awarded $5 million in funding for a four-year project focused on smart charging programs for electric vehicle charging. Exelon Corporation leads the project along with Argonne and other partners. Scientists will test a set of smart charging programs, devices and approaches, quantifying the potential benefits to EV owners and Maryland grid operators.

Since most charging stations currently lack networks that directly communicate between the vehicle and utility, researchers will install 400 Argonne-developed Smart Charge Adapters (a 2017 finalist for an R&D 100 Award) at locations to be determined by their infrastructure modeling. Researchers will also use vehicle telematics and an established network provider to offer smart charge management programs to thousands of customers across several customer classes.

Maryland, Argonne scientists team up to study nanoparticles in polymers

Polymers — large, chain-like molecules — are everywhere. Some occur naturally in living organisms; for example, proteins and the nucleic acids in DNA are polymers. Other polymers are synthetic: Think nylon, Teflon and epoxy. In recent years, scientists made the groundbreaking discovery that adding nanoparticles to a polymer created a lightweight yet strong material with applications for many industries. However, researchers have yet to fully understand the role nanoparticles play in polymers.

Catalysts are important; for example, the platinum in a catalytic converter speeds the chemical reaction that changes toxic carbon monoxide to less dangerous carbon dioxide. Single atoms make great catalysts, but they’re unstable and rarely stay unattached for long. How to stabilize them and keep them from clustering? To answer that question, Argonne collaborated with UMD, Johns Hopkins University (Baltimore), the University of Illinois at Chicago and the DOE’s Environmental Molecular Sciences Laboratory in Richland, Washington.

Because the most useful catalytic reactions occur at high temperatures, the team targeted catalysts with shock waves at heats of up to 3,000 kelvins (about 4,900 degrees Fahrenheit). Repeatedly exposing catalysts to such shock waves breaks them into single atoms, enabling them to remain stable for unprecedented lengths of time.

For this pivotal discovery, scientists used a platinum catalyst and a carbon substrate. As a catalyst, platinum accelerates many important reactions, such as powering fuel cells and converting natural gas to more useful forms. Computer simulations modeling how the system would behave closely matched the actual results obtained during tests at Johns Hopkins and X-ray absorption spectroscopy at Argonne’s APS.

Argonne-led collaborations pave the way for a greener tomorrow

In its 15th year, INCITE advances open science with supercomputer grants to 47 projects