Argonne’s collaborations in Louisiana and across the United States have led to groundbreaking discoveries and development of new technologies that help meet the nation’s needs for sustainable energy, economic prosperity, and security. 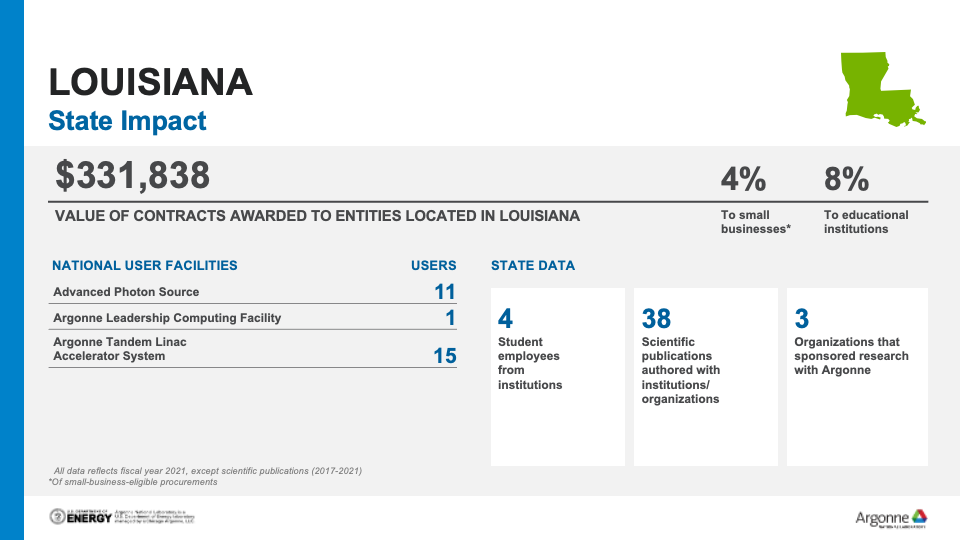 As the planet’s supply of fresh, clean water becomes scarcer, developing cost-effective desalination techniques — removing salts and other minerals from saltwater — becomes critical. A team of researchers from Louisiana State University in Baton Rouge and the U.S. Department of Energy’s (DOE) Argonne National Laboratory collaborated to test an innovative material that improves the desalination rate by 25 percent and reduces energy use by 10 percent.

The breakthrough occurred by improving on Argonne’s existing technology, resin wafer electrodeionization (RW-EDI), through the use of a new resin wafer binder material. During the collaboration, scientists substituted one ionomer adhesive for another, immobilizing the ion-exchange particles into porous beds. The new material binder increased the resin wafer conductivity by three times and allows for better ion exchange.

Because conventional EDI desalination methods are costly and complicated and deliver inconsistent results, they are limited to commercial applications where ultrapure water is needed, such as in the semiconductor and pharmaceutical industries. RW-EDI provides a low-energy, economically viable approach to water desalination as well as to chemical purification and recovery.

As part of the annual program, 62 graduate students were chosen to conduct their doctoral thesis research at one of the nation’s research laboratories. Argonne will host 12 of those students. This select group will benefit from mentoring and other resources from Argonne scientists.

Matthew Jordan, a graduate student from LSU, is enrolled in Argonne’s program. His mentor is YuPo Lin, a chemical and electrochemical engineer who holds numerous U.S. and international patents related to the manufacture and application of resin-wafer electrodeionization. Jordan’s thesis title is ​“Tuning Electrostatic Interactions for Selective Electrochemical Separations.”

The research program provides students with high-level mentorship, technology and resources while preparing them for STEM careers at national laboratories.

Researchers from LSU, Argonne and Drexel University (Philadelphia) have discovered an alloy consisting of gold and palladium that offers potentially significant benefits for infrared detection used by the military.

The team sought to identify a material that can generate hot carriers — that is, holes or electrons that become energized in a strong electric field — in the presence of near-infrared light. Because near-infrared light is invisible to the human eye, the military uses it during reconnaissance missions and for missile defense systems and night vision goggles.

During the four-year project, the team used the ultrafast infrared spectroscopy tools at Argonne’s Center for Nanoscale Materials user facility, one of the DOE’s five Nanoscale Science Research Centers.