Argonne’s collaborations in Mississippi and across the United States have led to groundbreaking discoveries and development of new technologies that help meet the nation’s needs for sustainable energy, economic prosperity, and security. 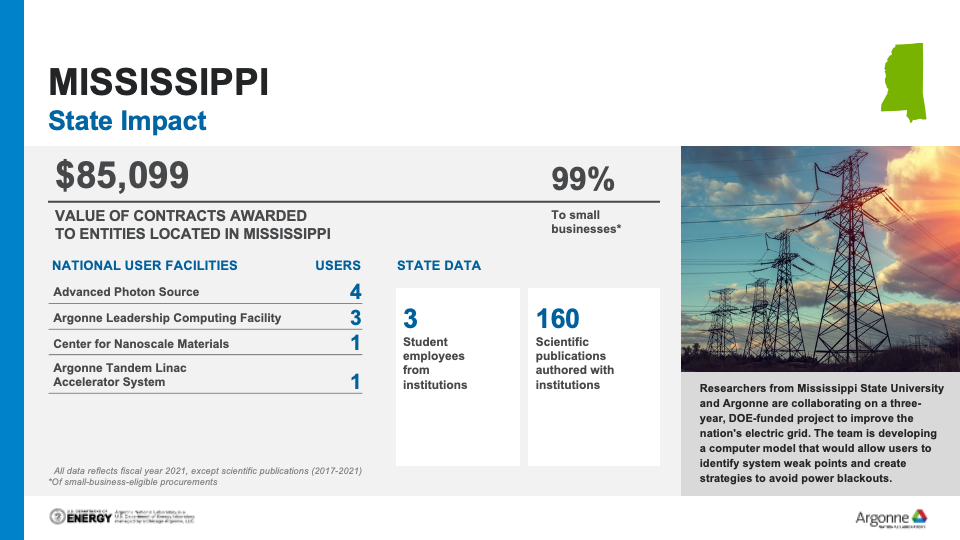 Scientists at the U.S. Department of Energy’s (DOE) Argonne National Laboratory and Mississippi State University are collaborating in a multiyear effort to improve the nation’s electric power grid. The three-year, DOE-funded project, titled ​“Macro-Resiliency of the North American Power Grid,” links scientists at the state’s flagship research university with researchers in Argonne’s Mathematics and Computer Science division, who create cutting-edge algorithms and software in numerical optimization and high-performance computing. The project’s objective is to develop a computationally efficient model that can capture electromechanical wave propagations within wide-area electric power systems. Researchers believe such a model will help them investigate strategies that will prevent cascading system failures (a common occurrence during periods of high energy use) in the presence of large, unexpected disturbances. The model also would allow users to identify system weak points and create strategies to avoid power blackouts.

Argonne scientists collaborated with nuclear physicist Lamiaa El Fassi of Mississippi State University in her research investigating the subatomic structure of nuclei. El Fassi studied highly energetic neutrons and protons, which are known to pair together inside the nucleus for very short amounts of time.

El Fassi’s research confirmed that even in neutron-rich nuclei, minority protons, on average, are more active ― and faster ― than majority neutrons. The team’s findings facilitate a better understanding of how atomic nuclei hold together. The discovery may also give scientists insights about neutron stars, the objects formed by the collapsed core of a giant star that has imploded — for example, how neutron stars form and how even a tiny amount of protons could affect their behavior.

Studying antimatter in the proton

The proton is a positively charged particle that exists at the center of every atom. Its building blocks consist of fundamental particles called quarks, and their antimatter counterparts, antiquarks. Scientists are studying the puzzling ways these particles interact with each other to form the proton.

Along with scientists from Mississippi State University, Argonne physicists conducted an experiment at the DOE’s Fermi National Accelerator Laboratory to investigate the nature of antiquarks within the proton with higher precision than ever before. By accelerating beams of protons at different targets and studying the aftermath of the collisions, they determined that a certain type of antiquark in the proton (the down antiquark) always outnumbers another type (the up antiquark), no matter how much momentum they have.

The results from this study agree with several existing models for the origin of this antimatter asymmetry in the proton and could inform further experiments on the subject.