Argonne’s collaborations in Georgia and across the United States have led to groundbreaking discoveries and development of new technologies that help meet the nation’s needs for sustainable energy, economic prosperity, and security. 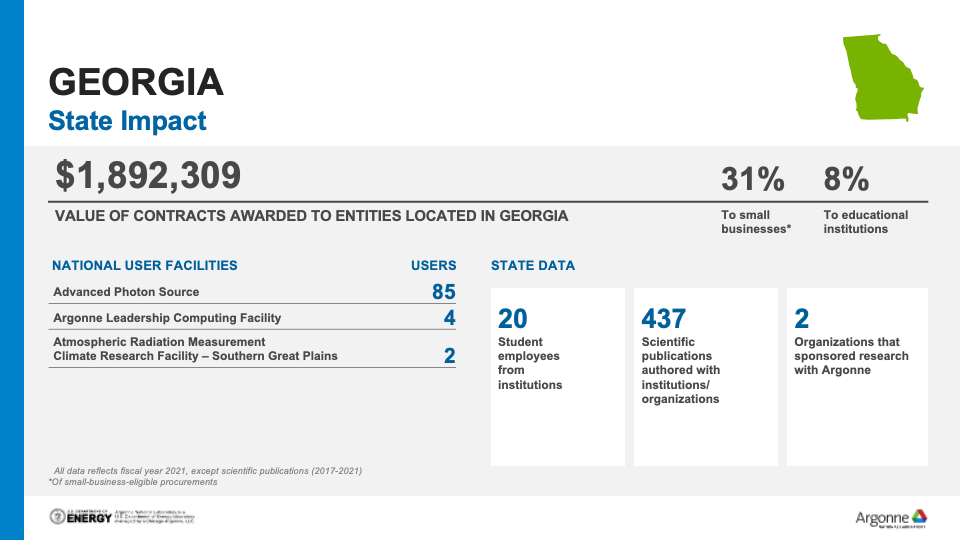 AT&T, a global leader in telecommunications, media and entertainment, and technology, engaged the U.S. Department of Energy’s (DOE) Argonne National Laboratory to help it build the company’s Climate Change Analysis Tool (CCAT). Using physics-based regional climate models — modeling that dramatically improves the ability to project changing risks to infrastructure from severe events — Argonne scientists developed a unique dataset that lets users project such risks to local communities. The datasets enabled AT&T to build CCAT, helping it anticipate how climate change will affect its infrastructure and operations 30 years into the future.

AT&T subsequently funded research at two Georgia universities to use the climate datasets to investigate flood risk. Scientists at the University of Georgia discovered that Black, Hispanic and low-income communities in one county experienced greater-than-average flood risk. Georgia Institute of Technology researchers found that inland flood risks in Georgia lie in areas where minority populations are in the majority. The data also enabled the team to determine that the floodplain has expanded and flooding intensifying.

To date, Argonne’s modeling system has generated over a petabyte of regional modeling data — the equivalent of hundreds of millions of photographs — making it North America’s largest repository of high-resolution climate modeling data.

Georgia Tech, Argonne partner to peek inside a lithium battery in real time

Despite the ubiquity of lithium batteries, the mechanics of how they operate remain unclear. But with high-intensity X-rays, a research team from Argonne and Georgia Institute of Technology captured high-speed images of solid-state batteries in operation.

Using the ultrabright X-rays at Argonne’s Advanced Photon Source (APS), a DOE Office of Science User Facility, a research team recently observed the internal evolution of the materials inside solid-state lithium batteries as they were charged and discharged. This detailed 3D information may help improve the reliability and performance of the batteries, which use solid materials to replace the flammable liquid electrolytes in existing lithium-ion batteries.

The highly sensitive APS beamline helped the team differentiate between various phases inside the battery. Researchers found that battery operation caused tiny voids to form, creating a loss of contact that is the primary cause of failure. X-rays from the APS allowed researchers to capture the changes inside the battery during this fast-evolving process. The team’s findings may lead to improved battery efficiency, helping to advance solid-state technology toward broader commercial application.

A team of scientists from Georgia Tech and other institutions used Argonne’s APS to study how water molecules can attach to special compounds known as metal-organic frameworks, or MOFs. MOFs are known to have a variety of applications, including gas separation and storage, electronics and drug delivery.

Many MOFs are unstable in the presence of water, a characteristic that limits how they can be used. However, some MOFs can adhere to water molecules and remain stable — or, at least, they don’t experience irreversible changes. Using the ultrabright X-rays at two APS beamlines, the team performed experiments on three distinct crystalline structures and identified MOFs that don’t experience large-scale structural changes. Their discovery points to the importance of investigating more stable MOFs to assess their potential for new industrial and medical applications.