Argonne’s collaborations in Illinois and across the United States have led to groundbreaking discoveries and development of new technologies that help meet the nation’s needs for sustainable energy, economic prosperity, and security. 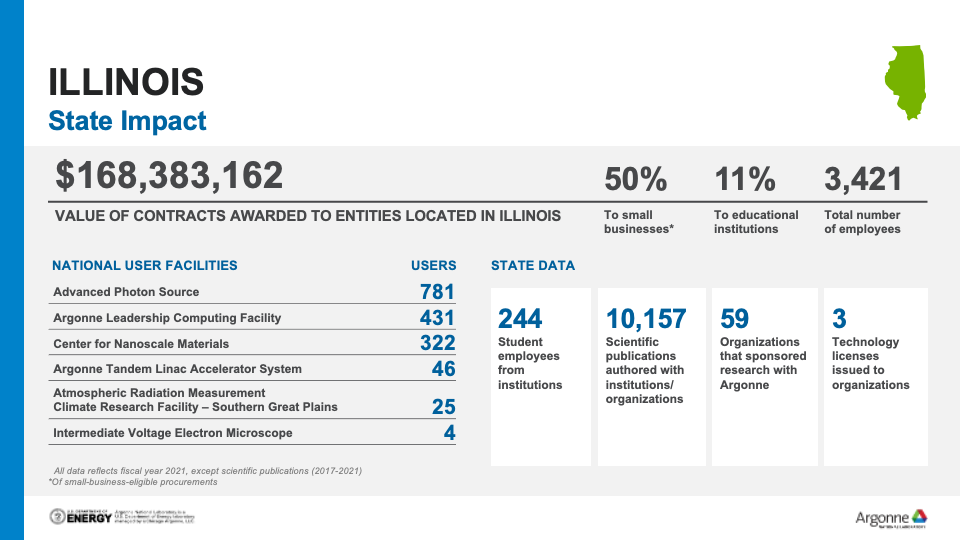 The U.S. Department of Energy’s (DOE) Argonne National Laboratory is among the winners of a 2022 Chicago Innovation Award for its work on a COVID wastewater surveillance system. In collaboration with the Discovery Partners Institute, Argonne researchers assembled one of the first teams in the nation to reliably analyze samples of raw sewage for evidence of SARS-CoV-2 RNA in 2021, providing real-time information to help both the Chicago Department of Public Health and the Illinois Department of Public Health through the pandemic.

Monitoring wastewater for infectious diseases will continue to be an essential tool for public health, not just during the ongoing COVID pandemic, but also as communities prepare for possible outbreaks of everything from flu and RSV to polio and mpox to other emerging diseases. Argonne’s expertise in genetic sequencing gives Illinois health officials and healthcare providers vital insights into understand what vaccines, medicines and supplies they need to treat people and what precautions they should take to keep people safe.

Argonne has a model which informed the technology of Schaumburg, Illinois-based Renewance. The company subsequently led a winning team in a prestigious battery recycling prize competition. This successful application of the model, called EverBatt, demonstrates its potential to help shape a robust battery recycling industry.

EverBatt is a free, publicly available Excel-based tool. It enables users to directly compare the costs and environmental impacts of battery recycling and other battery supply chain processes. It is designed to inform investment decisions in sustainable, cost-effective recycling infrastructure.

Many of Renewance’s customers need to decommission remote battery sites. This involves dismantling the components before transporting them to a recycling facility. Renewance can potentially hold the equipment in ​“interim storage” warehouses until there is enough volume for transport by full truck loads.

The CROCUS research team will also partner with community-based organizations on Chicago’s South and West Sides to envision and create a just transition with clean energy and green infrastructure that meets each community’s needs. Community partners include Blacks in Green, Greater Chatham Initiative, Puerto Rican Agenda and Metropolitan Mayors Caucus.

ClearFlame co-founders Julie Blumreiter and B.J. Johnson are alumni of the first class of Chain Reactions Innovations, a Lab-Embedded Entrepreneurship Program at Argonne. Working with Argonne researchers at the Lab’s Advanced Powertrain Research Center, Blumreiter and Johnson were able to advance their technology through additional engineering and data collection. Since then, ClearFlame has raised more than $20 million to continue commercializing its technology, and now has its first pilot trucks on the road.

Currently, ClearFlame is testing its technology on a nine-liter John Deere engine commonly used in a range of off-road equipment. Using corn-based ethanol in place of diesel can reduce carbon dioxide emissions by 45%-50%, with other feedstocks offering even larger reductions as the ethanol fuel pool is on track to reach net-zero for greenhouse gases by 2035.

For generations, science students were taught that water takes three forms: solid, liquid or gas. But now scientists have discovered a new phase: superionic ice. This type of ice forms at extremely high temperatures and pressures, like those found at the center of planets. Because scientists cannot explore those places physically, they attempt to replicate the conditions in the laboratory, squeezing samples between diamond ​“anvils” and heating them with high-powered lasers.

A team of researchers from the University of Chicago and the Carnegie Institution for Science, Washington D.C., used the extremely bright X-ray beams of the Advanced Photon Source (APS) a DOE user facility at Argonne, to reliably create, sustain and examine superionic ice.

Scientists are still exploring the full range of the properties of superionic ice. However, being able to map where the ice occurs, promises to reveal more about planet formation and even where to look for life on other planets. From this discovery, scientists believe these conditions exist deep inside Neptune and Uranus and in other icy, rocky planets like them in the universe.

One of the most important questions in science is how life began on Earth. A possible theory is that wet-dry cycling created conditions that allowed membraneless compartments called coacervates to act as homes for chemicals to combine into life-sustaining molecules. Scientists from UChicago and Pennsylvania State University collaborated to study coacervates in water with makeup similar to that of pond water. A pond would regularly dry up and be replenished with rain or changing tides. This cycle of dehydration and rehydration could provide an environment where molecular building blocks could assemble into the molecules of life: proteins, DNA and RNA.

The team used the extremely bright X-rays at the APS to study coacervates as they underwent phase changes. Small-angle X-ray scattering at the APS suggested how the structures may have behaved in early Earth during a wet-dry cycle. The team found that repetitive cycles of hydration and dehydration caused the compartments to undergo changes in their composition and structure. Their discovery could signal important implications for the design of electronics and drug delivery systems.

Connected to a network of veins, arteries and capillaries spanning more than 60,000 miles, the heart is the human body’s most important muscle. Yet, even with heart disease ranking as the world’s number one cause of death, understanding the heart’s physiology remains elusive. To learn more about muscle function, researchers used the BioCAT beamline at Argonne’s APS to study how tarantula muscles contract and relax. Both human and spider muscles contain myosin, a family of motor proteins essential to movement, and studying the myosin in spider muscles may provide insights into the ways our own muscles move.

Scientists at the Illinois Institute of Technology in Chicago and the University of Massachusetts Medical School in Worcester conducted X-ray diffraction experiments to learn how tarantula muscles are activated. Tarantulas have well-ordered filaments in their muscles, which allows for strong X-ray diffraction patterns. The team demonstrated the presence of two interacting molecular motors in live muscle that produce the force in that muscle — structures that, other studies suggest, also exist in the human heart. The team’s findings may help advance the design of more-effective drugs for human heart conditions, such as hypertrophic cardiomyopathy, in which a thickened heart muscle can lead to cardiac arrest.

Romeoville, Illinois-based Advanced Diamond Technologies (ADT) leveraged the pioneering technology discovered by Argonne to produce diamond films for industrial, electronic, mechanical and medical applications. The start-up was co-founded in 2003 by Argonne Materials Science researchers Orlando Auciello, John Carlisle and Neil Kane. While Carlisle was an executive with ADT for a while, he later returned to Argonne to encourage the next generation of innovators as director of Chain Reaction Innovations, which gives science entrepreneurs access to Argonne’s broad, multi-discipline resources for two years to help mature their technologies.

Caterpillar Inc., Deerfield, Illinois collaborated with Argonne and software developer Convergent Science Inc. in Madison, Wisconsin to modernize its engine development process. Caterpillar, a manufacturer of construction and mining equipment, relied on Argonne’s world-class resources to help improve the fuel economy, reliability and longevity of its engines. If it wasn’t for leveraging Argonne’s resources, Caterpillar would have faced a costly and time-intensive process.

Argonne’s pioneering leadership in developing engine models and software for computer simulations provided the necessary virtual look that Caterpillar needed before production even started. It also provided a better understanding of how engine parameters interact. This collaboration allowed Caterpillar to significantly reduce the number of its experimental test campaigns, shrink the engine development timescales and lower the cost of its engine development process. 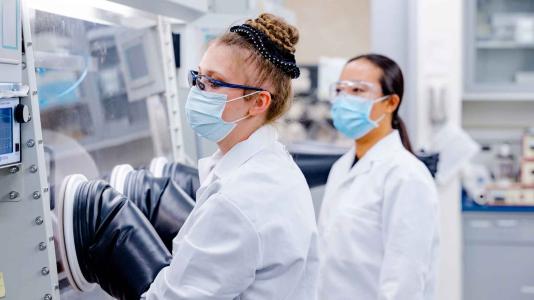