Argonne’s collaborations in Pennsylvania and across the United States have led to groundbreaking discoveries and development of new technologies that help meet the nation’s needs for sustainable energy, economic prosperity, and security. 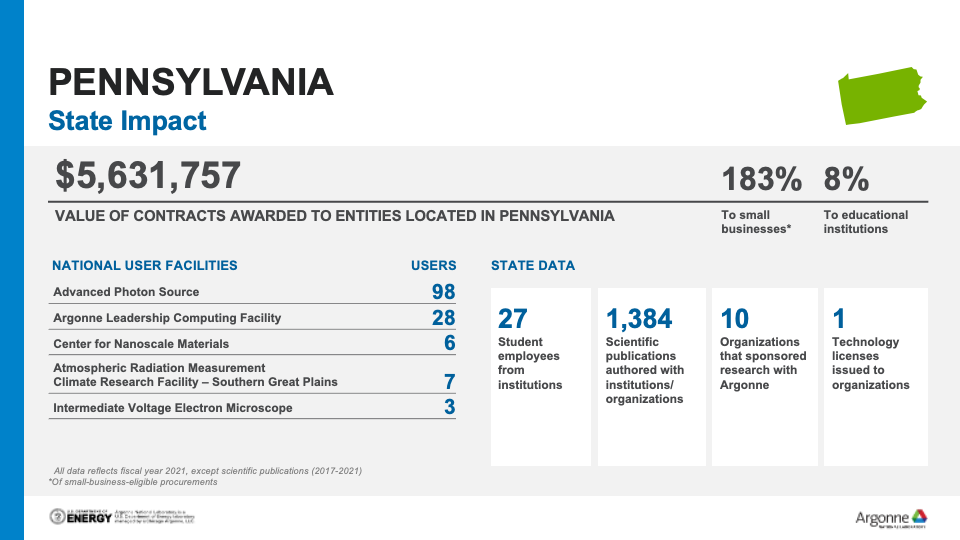 Researchers from the U.S. Department of Energy’s (DOE) Argonne National Laboratory and the University of Pennsylvania in Philadelphia have characterized a special class of molecules important to climate change and the chemistry of combustion, or burning. Chemists have sought for years to identify this group, which they call carbon-centered hydroperoxyalkyl radical, or QOOH, an intermediate product during reactions that occur in climate change and in some combustion engines. QOOH functions as a ​“switchyard” that controls steps in the chemistry.

Although for years scientists had formed hypotheses about the QOOH molecule, it was difficult to observe directly because it quickly degrades. QOOH is produced during reactions of volatile organic compounds commonly emitted by trees and in industrial processes. A key component in gasoline, the compounds are also emitted into the environment through the use of household products and building materials.

The team’s findings could drive the design of higher-efficiency, lower-polluting engines and a greater understanding of what happens when emissions pollute the atmosphere. They may also help scientists understand the atmospheric reactions of volatile organic compounds that occur naturally worldwide.

One of the most important questions in science is how life began on Earth. A possible theory is that wet-dry cycling created conditions that allowed membraneless compartments called coacervates to act as homes for chemicals to combine into life-sustaining molecules. Scientists from the University of Chicago and Pennsylvania State University collaborated to study coacervates in water with makeup similar to that of pond water. A pond would regularly dry up and be replenished with rain or changing tides. This cycle of dehydration and rehydration could provide an environment where molecular building blocks could assemble into the molecules of life: proteins, DNA and RNA.

The team used the extremely bright X-rays at the Advanced Photon Source (APS), a DOE Office of Science User Facility located at Argonne, to study coacervates as they underwent phase changes. Small-angle X-ray scattering at the APS suggested how the structures may have behaved in early Earth during a wet-dry cycle. The team found that repetitive cycles of hydration and dehydration caused the compartments to undergo changes in their composition and structure. Their discovery could signal important implications for the design of electronics and drug delivery systems.

Researchers from Drexel University joined Louisiana State University and  Argonne in the discovery of an alloy consisting of gold and palladium that offers potentially significant benefits for infrared detection used by the military.

The team sought to identify a material that can generate hot carriers — that is, holes or electrons that become energized in a strong electric field — in the presence of near-infrared light. Because near-infrared light is invisible to the human eye, the military uses it during reconnaissance missions and for missile defense systems and night vision goggles.

During the four-year project, the team used the ultrafast infrared spectroscopy tools at Argonne’s Center for Nanoscale Materials user facility, one of the DOE’s five Nanoscale Science Research Centers.

A consortium of universities, led by Carnegie Mellon University, has constructed a new X-ray diffraction instrument at Argonne’s APS, a DOE Office of Science user facility. The consortium will use the ultrabright X-rays generated there to create 3D views of a wide variety of materials.

The APS beamline 1-ID uses non-destructive X-rays to measure ceramics, metals and other polycrystalline materials on the grain scale. But as a world-leading destination for gaining this unique information, the APS beamline is in high demand. Carnegie Mellon scientists were inspired to lead an effort ― funded by the National Science Foundation ― to design and build the new High-Throughput High-Energy Diffraction Microscopy Instrument at the APS 6-ID-D beamline to provide more experiment options for scientists. The instrument will streamline measurements, allowing scientists to gain a better understanding of how existing materials behave under thermal and mechanical stresses and enabling the discovery of new materials, such as new forms of cathodes and anodes for batteries.

Other members of the consortium include the Colorado School of Mines, Purdue University and the University of Utah.

Argonne and Pitt uncover the ​secrets of solar cells

Solar power is a renewable, sustainable and virtually inexhaustible source of electricity. Solar cells, therefore, are essential to the mission of clean energy advanced by the DOE. But temperature can have a dramatic effect on solar cells, profoundly influencing their efficiency and lifespan.

Researchers at the University of Pittsburgh and Hamad Bin Khalifa University leveraged the power of supercomputers at Argonne to study how a material’s electronic structure leads to fluctuations in the operating temperature of solar cells.

Using the supercomputers at the Argonne Leadership Computing Facility (ALCF), a DOE Office of Science User Facility, the team studied grain boundaries, ubiquitous defects that can greatly affect a material’s mechanical and electronic properties. Interpreting the atomic structures within a grain boundary is difficult without theoretical models. The ALCF’s high-performance supercomputers enabled the team to create simulations and ultimately gain a comprehensive understanding of how temperature impacts the electronic structure of a solar cell.

The advent of 3D printing promises to revolutionize the manufacturing industry. Yet, the tiny gas pockets that sometimes form during the printing process can lead to cracks and other product failures. Researchers from Carnegie Mellon and Argonne have identified how and when these gas pockets form — a pivotal discovery that could dramatically improve the technology.

Until now, manufacturers had used a trial-and-error approach to seek to reduce such defects. Researchers used the high-energy X-rays at Argonne’s APS to take superfast video and images of the printing process. The images revealed that defects form when pockets of gas (known as vapor depressions) become unstable during the laser scanning that forms the product.

The team also determined how to predict when a small depression will grow into a big, unstable one that can potentially create a defect. 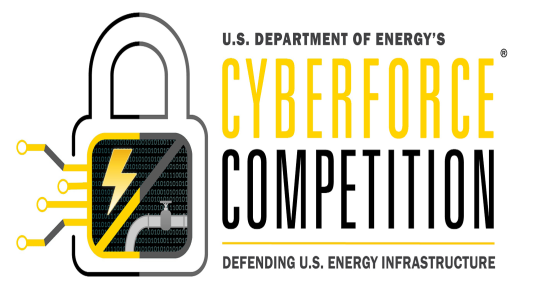 Exploring and manipulating the behavior of polar vortices in material may lead to new technology for faster data transfer and storage. Researchers used the Advanced Photon Source at Argonne and the Linac Coherent Light Source at SLAC to learn more.
April 14, 2021 | Physics, Atomic Physics, X-Ray Science and Technology 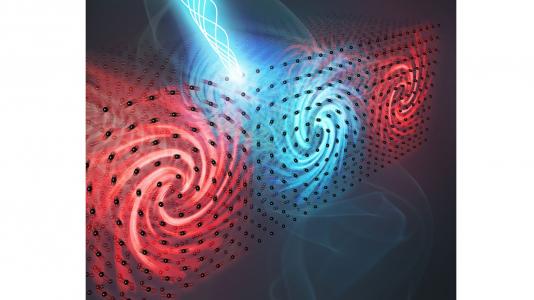