Argonne’s collaborations in Nebraska and across the United States have led to groundbreaking discoveries and development of new technologies that help meet the nation’s needs for sustainable energy, economic prosperity, and security. 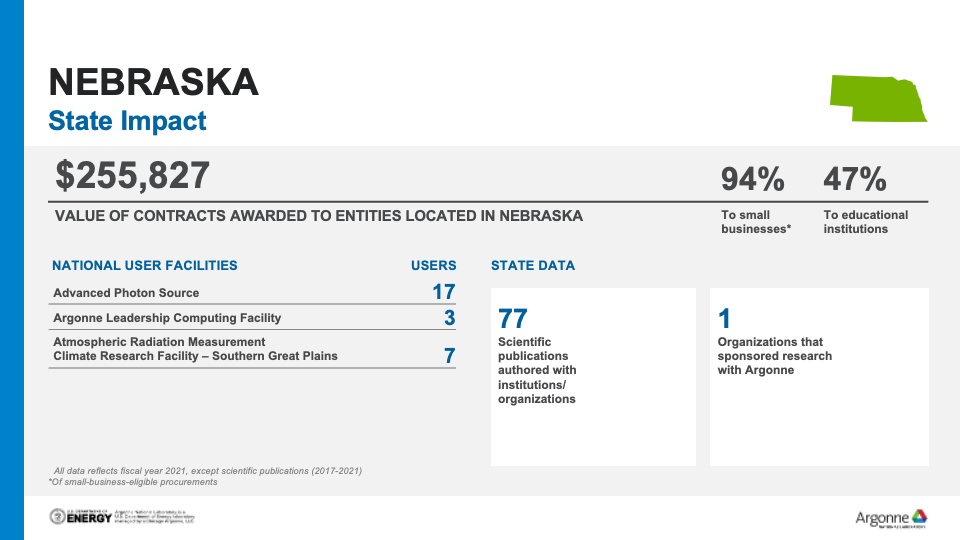 The team’s streamlined process consists of customized investigation approaches that minimize disruption and the generation of hazardous waste. Some approaches include a spray irrigation system, using plants to reduce contaminant concentration, and using chemical agents to change contaminants into less toxic forms. At sites across Nebraska, Kansas and Missouri, Argonne researchers have investigated scores of former federal grain storage facilities where carbon tetrachloride had been used as a pesticide, resulting in soil and groundwater contamination. Extensive long-term monitoring of these sites has generated a body of data to support detailed evaluation, extensive predictive modeling and ongoing remediation efforts.

Argonne’s work is supported by the Commodity Credit Corporation of the U.S. Department of Agriculture.

With growing interest in renewable energy, scientists seek ways to optimize the cultivation of biomass feedstocks — that is, crops that can be used as fuel or another form of energy. Bioenergy feedstocks include agricultural crop and forestry residues and crops specifically cultivated for energy. And while such feedstocks are widely available and less costly and can reduce the planet’s overreliance on fossil fuels, like any other crop, they still require irrigation for proper growth.

Argonne researchers studied the fresh, renewable water sources available for growing bioenergy feedstock in western Nebraska and quantified the potential impact of such irrigation on the water supply for non-bioenergy crops. While in most U.S. counties the annual use of water to irrigate bioenergy feedstocks accounts for only a fraction of 1% of streamflow, in water-stressed regions in Nebraska the team found demand for groundwater irrigation could exceed the projected amount of renewable groundwater received annually, limiting the total water available for all crops.

Using two authoritative water availability indexes, the team applied their findings to three likely scenarios and concluded that improved water resource planning would reduce groundwater consumption to the year 2040 and increase its availability to other sectors.